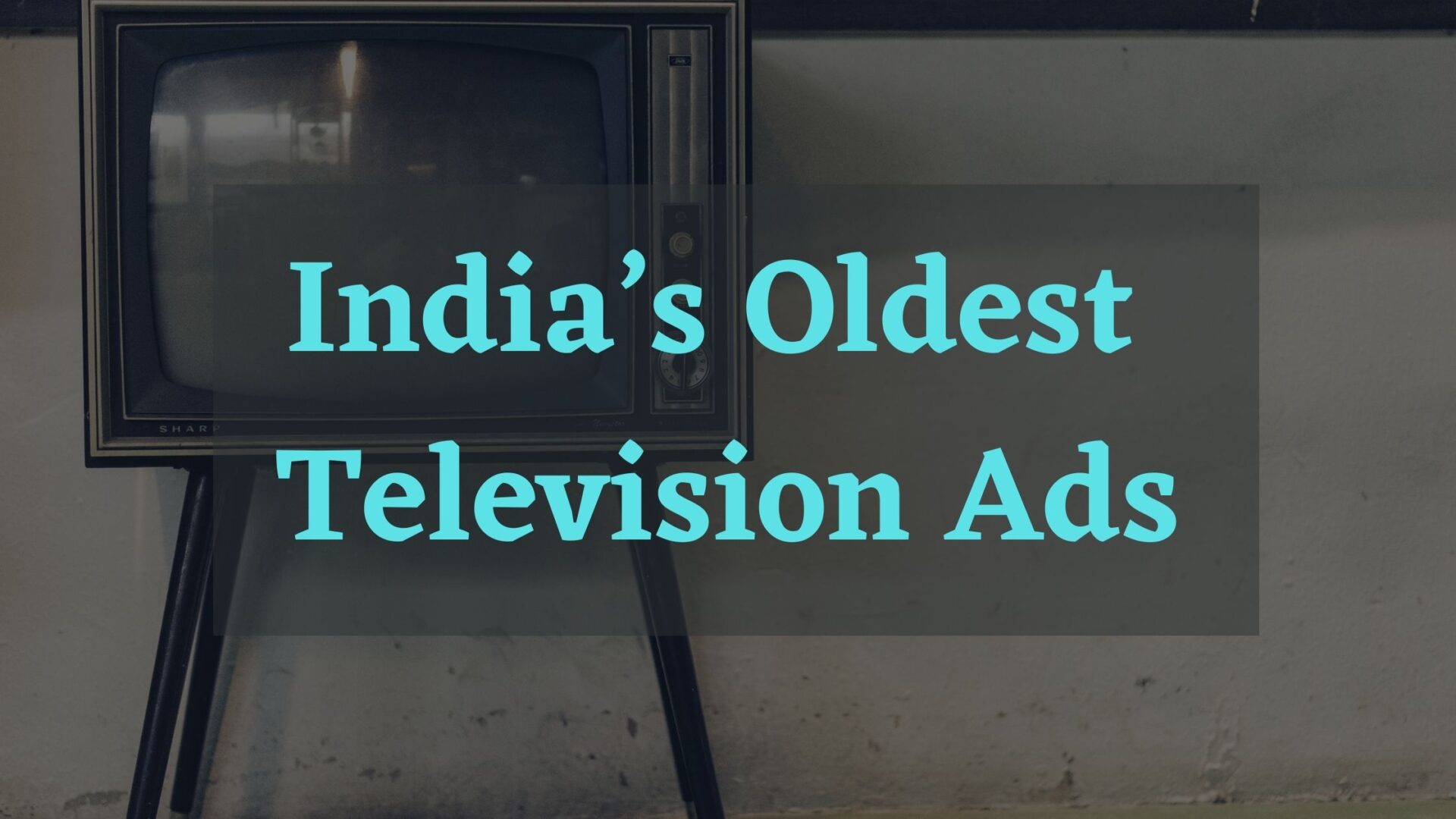 The advertisement of LIFEBUOY, the famous body soup brand published in 1964 by Lowe Lintas ad agency is one of the oldest TV commercials published in India. It came with a jingle,” Tandurusti ki Raksha Karta Hain Lifebouy, Lifebouy Hain Jahan tandurusti hai wahan”( Lifebouy protects health, wherever there is Lifebouy there is heath. It promised to protect the health and help to maintain the hygiene to the customers via television as well as radio spots.

In 1974 an animated educational short film was published by the Films Division of India ad agency. It was titled ‘ Ek chidiya, anek chidiya’ (one bird, many birds). It was broadcasted on Doordardarshan with an intention to teal children about teamwork and unity. The commercial gained immense popularity during its time.

The advertisement for Britannia glucose D that specially targeted kids were published in 1976, by Lowe Lintas ad agency was one of the most iconic biscuit ads of all time. It featured the famous Bollywood villain ‘Gabbar Singh’ of ‘Sholay’. The advertisement used an original dialogue from the movie to create a catchy tagline. The advertisement played ‘ Britannia Glucose D biscuits, Gabbar ki Asli pasand’.

The Complan ad published in the 1980s by Chaitra advertising is one of the iconic health drinks advertisements of all time. The advertisement featured Bollywood actors Ayesha Takia and Shahid Kapoor saying the famous Complan tagline “ I am a Complain boy and I am a Complain girl. This advertisement is known to change the way of promoting children’s nutrition in India.

The 1980s advertisement off Maggie, the Nestle-owned noodle brand published by Hindusthan Thomson Associates is another iconic advertisement that made Maggi the ultimate comfort food for the Indians. it featured our mother promising the kids the Maggi noodles in just two minutes. That’s when the success story of Maggi started.

The advertisement for the Taj Mahal, the famous tea brand published in the 1980s by JWT is one the most famous ads of its time. Then all the other brands were using international techniques and faces or promoting their products the Papa Taj Mahal ad featured Zakir Hussain the famous maestro playing the tabla. It helped in giving the brand an Indian feel.

The Vicks Cough drop advertisement published in 1982 by Ambience add agency is another memorable TV commercial of its time. It featured the actor Jayant Kripalni. It was featured with a jingle, ‘Vicks ki goli lo, khichkhich dur karo’. The advertisement was popular and helped in selling Vicks cough drops.

The TV commercial of Pan Parag, the own masala brand bas3d in Kanpur was published in 1982 by Everest Advertising ad agency. This was famous for featuring Ashok Kumar and Shami Kapoor where they subtly highlighted the menace of Dowry. The ad was regular on Government TV channels during its time.

The Sun Drop sunflower oil ad published in 1989 by the ad agency FCB Ulka is another iconic advertisement that helped in popularizing the sunflower oil brand when groundnut oil was more in demand. The ad featured a kid with a cart-wheel full of food items cooked in Sun drop oil.

In 2002, UNICEF launched a campaign published by the agency Ogilvy and Mather for making India Polio free. It featured Amitabh Bachchan, the then angry man of Hindi movies yelling at parents to take their kids to Polio booths. The advertisement was famous and helped in making India Polio-Free by 2014. It had a famous tagline, ‘Do bond Zindagi ke’ (two drops of life).

The advertisement of Nirma detergent published in the 1980s by Purnima Advertising is a memorable TV ad of its time and beyond. Its jingle, ‘ Hima, Rekha, Jaya aur Sushma, sabki pasand Nirma’ ( Hima to Sushma every one likes Nirma) became very popular and help in promoting the detergent brand.

The advertisement campaign for hero Honda published in 1984 by FCB Ulka ad agency became a very popular TVC of its time. It used the tagline ‘Fill it. Shut it. Forget it.’ to promote its bikes with promising mileage of 60 to 70 kilometers per liter.

The advertisement of ‘Raymond-The complete man’ published by Nexus Equity ad agency in 1991 was the pillar of Raymond’s success as a clothing brand. The ad featured the founder of Raymond, Rajiv Agarwal as a caring, urban family man in various ad campaign series for Raymond.

The Asian Paints TV commercial published in the year 2002 by the Ogilvy and Mather ad agency is another famous which came with a tag line, a poetic discourse,’ Har that chup chap se ye kehte hain, ki andar isme Kaun rents hain’. This ad was one of the most popular ads of the brand and helped in popularizing it.

This TV commercial takes you back to those days of not having the craze of television. The advertisement was quite of an influence. Back then the presence of evil only meant bad luck. However, the appearance of the devil selling a television is pretty hilarious. The catchphrase of ‘neighbor’s envy. Owner’s pride’ was well depicted with the help of a negative role. The advertisement was well praised. Although, you would not speak something as the tagline even within your own house. It was impolite to do so.

This was a classic TV commercial from the ‘80s. In the ad, a little boy is seen who is angry with his and flees to a nearby railway station. He sits on a bench while strangers looked at him with worry. He seemed to notice one of his acquainted people and calls him out. The man worriedly looks at him asks why he was in the railway station. To that, he answers that he was leaving his house. The man tells him that his mother was making jalebis and listening to that the boy returns home. Well, you could not possibly be mad at your mother’s homemade food. This is why this ad is nostalgic and iconic.

Eveready: “Give me red”

This TV commercial was the talk ok of the town when it first came out. It was an iconic advertisement where a biker breaks into a pub and asks the bartender “give me red”. The ad was cool and highlighted the dose of energy. Well, it was a battery ad after all. This generation would probably find it chaotic or dramatic. However, the appeal of this ad was much more to the people of those days. At least, the message of the battery product was clear as it portrayed energy.

The Amul milk ad is solely commercial and focuses on milk only. There is no extra storyline or anything like that. What they do have is a song that made people mumble the words every day. It was not catchy or anything of that sort. It was rather rhythmical and something you could hum to every day. Could it make you fall in love with milk? No. Could it make you watch the commercial again? Yes. Hence, this ad was great too.

In the 90s, the people of India were not very open-minded and women were to act in a certain way. Although, the scenario now is way different. In the commercial, a young woman is seen in a stadium watching her boyfriend play cricket. She takes a bite of the Cadbury chocolate when her boyfriend gets a victory shot and she is out of bounds. She starts dancing among the large crowds of people watching her in amazement. The ad was very influential, to say the least. It was everything a girl could dream of growing up in that decade. There are no such guidelines as to how a girl should act in public places and this commercial depicted that.

If this isn’t the most iconic ad of the 70s, we don’t know what is. Instead of picking any Bollywood faces, the soap brand picked Karen Lunel under a waterfall in a green bikini. She was tagged as the Liril girl and warned so much of fame, and years later, Priety Zinta also gained popularity through the same. The concept of women wearing bikinis was almost unimaginable. Not that the soap brand could change that orthodox thought of the people but at least the concept was brought up and led to a beginning.

“ Sunday ho ya Monday Roz Khao ande.” The phrase seems familiar, doesn’t it? The Nation Egg Coordination Committee never really changed the tagline after all. In the ad, a bunch of children sings the tagline. The NECC made this commercial to ensure that people are including eggs in their daily diets. The tagline is something you would teach a nursery child. However, the adults need to be aware of this cause they often seem to avoid eggs as it is sometimes considered as “unnecessary fats”.

This commercial is an absolute classic. In the commercial, Lalitaji, a legit bargainer, explains to the viewers how cheap things are different that quality products at a reasonable rate. The women of the 80s were crazy over the commercial. It was up for good gossip as it was rumored that Surf was fighting Nirma, which is another cheaper detergent brand.

These ads bring a hint of nostalgia to every heart. It almost reminds us of the time of classic Bollywood, retro music, and everything evergreen. The kids of the 2000s would probably not understand the impact of it but they were influential at a point in time. India with the duration of time has evolved and changed mindsets without dropping out of the prestigious culture. Here was a list of your iconic TV commercials from the past decades. It probably gives us a wave of feelings as it is probably the classics of old times.