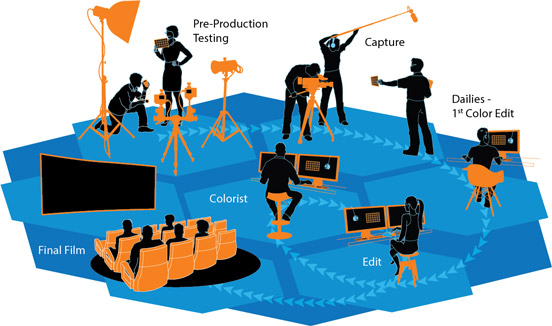 After taking a brief, the same is shared with our script writer.  The script writer analyses the content and prepare a script based on the customers feedback and  and inputs  from corporate film production company. The script sent to the customer for approval and changes if any.

Once the customer approves the script, a story board is prepared. The story board visualses the script in form of a pencil sketch and tries to shows to the customer the various elements that would be used in the corporate film. On approval of the story board, the shooting plan is decided. In accordance with the plan, the customers locations, (which could be a factory plant )interviews with key personnel and any other elements that may be required are shot. After the shooting process is over, a voice over is done of the script.Now comes the editing part. An experienced editor along with the director of the corporate film, edits the story according to the script and storyboard. The director and editor may mutually decide to add elements like graphics, transition and VFX to the corporate film. Now the basic structure of the corporate film is ready. This is called the first cut. The first cut is sent to the client for approval and changes. The final cut is prepared this is a basic structure of Corporate film production.

We are from corporate film makers, if you need such services then please lets us know.