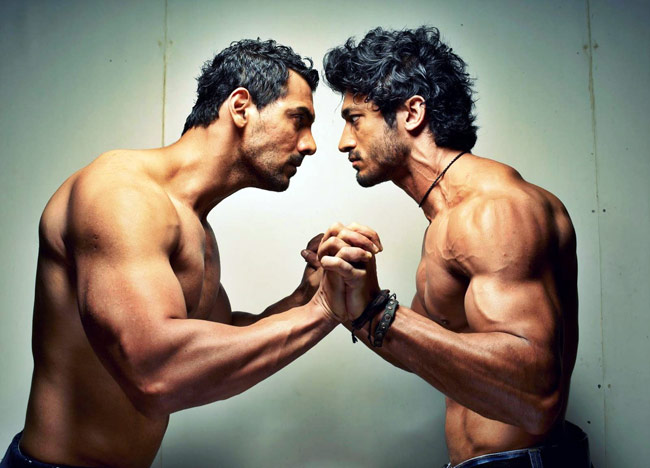 It is not easy to find a film that does not promise an iota more of anything than it intends to deliver, and then efficiently delivers on that promise. Force 2 is an intense action flick that serves up slick stunts and technical finesse to support its straight-laced storytelling style.
1476120053_force-2The poster of Force 2.
Director Abhinay Deo’s latest film is a sequel to Nishikant Kamat’s Force (2011), which starred John Abraham and Genelia D’souza. That film in turn was a remake of the 2003 Tamil blockbuster Kaakha Kaakha directed by Gautham Menon, starring Suriya Sivakumar and Jyothika.
Force did not have Kaakha Kaakha’s emotional heft, but it did have gripping, not-before-seen action plus a villain worth living and dying for. Its Achilles heel was the casting of the heroine. Four years since Force, the franchise repeats the mix, giving us gripping action once again, a solid villain and a contentious heroine .
Abraham is back in Force 2 as a well-intentioned Mumbai policeman who does not play by the book because the book, in his opinion, can tie a good cop down. In the years since Yashvardhan lost his wife (played by D’souza) in the first film, he has remained as strong-willed, impertinent and determined to vanquish evil as he was back then. When a bunch of agents of the Indian intelligence agency RAW (Research and Analysis Wing) are exterminated in well-planned back-to-back killings, Yash enters the picture to find out why and to prevent further deaths.
The case lands him in beautiful Budapest. His partner and supposed boss in this mission is RAW officer KK, Kamaljit Kaur, played by Sonakshi Sinha. KK is to the always-defiant Yash what chalk is to cheese, so of course they clash repeatedly.
Together, they find themselves up against an antagonist who somehow manages to stay ahead of them every step of the way. Shiv Sharma (Tahir Raj Bhasin) is driven by an unexplained grouse against RAW and India. It is evident from the moment we meet him that Yash and KK will solve the case when they crack the reason for his animosity.
The purposefulness of this film’s writing is both its strength and its weakness. Parveez Shaikh & Jasmeet K. Reen are here to entertain us with suspense and unrelenting skirmishes – involving wit, guns and fisticuffs – and they do that well. If only they had paid more attention to the characterisation of Yash and KK, Force 2 would have been more than just that.
We are from corporate film makers, If you need such services then please let us know.